A Brief History of the 751st Tank Battalion

The 751st Tank Battalion was activated at Fort Benning, Georgia, on June 1, 1941.  It was then moved to Fort Knox, Kentucky, where the battalion was training when the Japanese attacked Pearl Harbor on December 7, 1941.  In early 1942, the battalion moved from Fort Knox to Camp Gordon, near Augusta, Georgia, and then to Fort Jackson, South Carolina.  In June of 1942, the 751st Tank Battalion performed a tactical demonstration for Winston Churchill at Fort Jackson.  Churchill was impressed with the battalion and wanted it in England to help protect the British Isles from a Nazi invasion.  And so the battalion boarded a train bound for Fort Indiantown Gap in Pennsylvania, where they staged for a few days before being loaded into the backs of trucks and hauled, in the dead of night, from Pennsylvania to New York Harbor.  One can only imagine the mixture of fear, excitement, and anxiety the tankers must have felt as they drove through a blacked out New York City toward an uncertain future.
On August 6, 1942, the Battalion boarded the H.M.S. Andes at New York Harbor, a British ship that carried over 7,000 troops at a time.  Once on board, the men of the 751st were ordered below decks away from unfriendly eyes, where they stayed until the Andes was out to sea.  The Andes made a stop at Halifax, Nova Scotia, before heading toward England.  Many men of the 751st complain to this day of the British food they were fed, dishes like mutton and kidney pie.  They also remember the seasickness they suffered almost nonstop for the eleven days it took to sail the Atlantic.
On August 17, 1942, the Andes sailed into port at Liverpool, England.  From Liverpool the 751st was taken to an assembly area to gather up their gear before traveling to South Hampton, near London, where they would live and train for the next five months.  While there, they were reviewed by Eleanor Roosevelt.  When not training, the men of the 751st were allowed to see the sights and to experience London’s night life.  Many of the men remember the pubs fondly and speak of the warm, strong beer served there. The British treated Americans well; the women, especially, loved the Yanks.
But during the day it was all seriousness.  The 751st Tank Battalion trained hard for their upcoming encounter with the enemy; the time and place of which being still unknown to them.
On September 11, 1942, a little over a month after it landed in England, the 751st Tank Battalion suffered its first casualty of the war.  After a day of training, the men of the battalion were relaxing in their barracks.  A captain was in his room cleaning his .45 caliber pistol when it accidentally fired, sending a round through the wall and into one of the enlisted men’s barracks on the other side.  The round struck and killed Tec5 William A. Kaminski of Ohio.  Kaminski was later buried at the American Military Cemetery in Cambridge, England.
On January 8, 1943, the 751st boarded ships once again and sailed for Oran, Algeria, where they would help reinforce the Allied forces of Operation Torch that had landed in Africa a couple of months earlier.  Their first real taste of combat came in early April of 1943, when the battalion, attached to the 34th Infantry Division, attacked the Germans at Fondouk el Okbi in Tunisia.  But the Germans were not to be easily moved.  The fighting was tough.  The battalion lost several of their M-3 Grant tanks during this battle and the 34th Division suffered heavy casualties as the Germans fended off their initial advances.  During this battle, my father, Paul Neumiller, lost his best buddy, Thomas Lamb.  Lamb’s tank was hit and he was burned beyond recognition.  My father had to identify a pair of rings as those belonging to Lamb, and always said that it was the worst day of his life.
By May the Allies had driven the Germans north to the Mediterranean, where they were evacuating their armies to Sicily and Italy.  Company A of the 751st Tank Battalion was the first Allied unit to enter the strategic port city of Bizerte, Tunisia.  Most of the Germans had retreated in front of them, leaving behind a few snipers and booby traps to harass the advancing Allied army.  By mid May, the African continent was securely in the hands of the Allies. 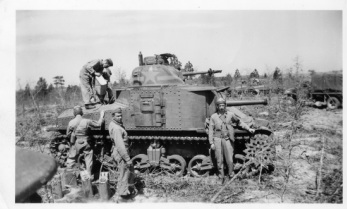